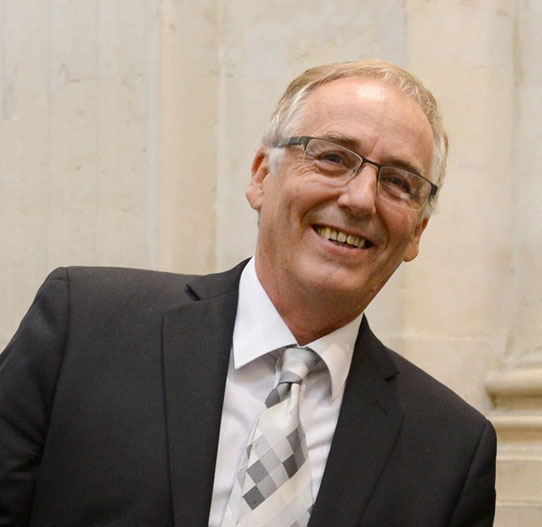 The objective of this presentation is to introduce the new paradigm that will be used from 2020: the “Plug & Network” concept. This concept allows to derive new network architectures ranging from completely centralized architectures to fully distributed solutions. We will examine the pros and cons of the different potential architectures coming from SDN, NFV, 5G, etc.

Guy Pujolle is a computer science professor at Sorbonne University during 1981-1993 and from 2000 to the present day. Before, he was a member of the Institut Universitaire de France from 2009 to 2014, a distinguished professor at UFRJ from 2014 to 2016, and at the Division of IT Convergence Engineering of POSTECH, the Pohang University of Science and Technology, Korea, from 2011 to 2013. He was appointed by the Education Ministry to found the Department of Computer Science at the University of Versailles, where he spent the period 1994-2000 as Professor and Head. He was Head of the MASI Laboratory, University Pierre et Marie Curie (now Sorbonne University), 1983-1993, Professor at ENST (Ecole Nationale Supérieure des Télécommunications), 1979-1981, and member of the scientific staff of INRIA (Institut National de la Recherche en Informatique et Automatique), 1974-1979.
Guy Pujolle received different prices for his work and publications, in particular the Grand Prix of French Academy of Sciences (40 000$) in 2013. He is a member of The Royal Academy of Lund, Sweden, and member of several scientific advisory boards in the world. He was also a member of the Scientific Advisory Board of Orange Group during 1990-1998 and 2002-2010,
Dr. Pujolle is the French representative at the Technical Committee on Networking at IFIP. He is an editor for ACM International Journal of Network Management, International Journal on Telecommunication Systems, and Editor in Chief of “Annals of Telecommunications”. He was an editor for Computer Networks, Operations Research, Editor-In-Chief of Networking and Information Systems Journal, WINET, Ad Hoc Journal and several other journals.
Guy Pujolle is a pioneer in high-speed networking having led the development of the first Gbps network to be tested in 1980. Among first steps in different technologies, he achieved the first pre-ATM prototype in 1981, first prototype of a networking piloting system using a knowledge plane in 1996, first patents and prototypes on DPI (Deep Packet Inspection) in 2000, first prototype of a Wi-Fi controller in 2000, first patents on network virtualization (migration and opening virtual networks on the fly) in 2008. He has also patents on metamorphic networks, green communications, and security in the Internet of Things.
He was a European expert involved in the development of IP over ATM for European high-speed networks. He was chairman of the French Research Network REUNIR from 1987 to 1991, one out of the three members of the Wisdom Committee (Lars Backstrom, Brian Carpenter, Guy Pujolle) to decide on the future of TCP/IP in the European research network (decision January 22, 1990 to choose TCP/IP as the technology to be used for Europe instead of ATM). Chairman of the expert committee of the Ministry of Telecommunications for Telecommunication regulation (1992-1998).
Guy Pujolle was Technical Chairman of the WLANSmartCard consortium for normalizing security and mobility in wireless LANs using a smartcard (2002-2006).
He has published widely in the area of computer systems modeling and performance, queueing theory, high-speed networks, intelligence in networking, wireless networks, Post-IP networks, and virtual networks. He has published 22 influential texts and monographs in these areas. He is a Professor Honoris Causa of Beijing University of Posts and Telecommunications since 1988, and Invited Professor of several Universities: NCSU, Stanford, UFRJ, Rutgers, UQAM, and POSTECH. He was awarded the Special Seymour Cray Award in 1991 for his research, and Silver Core from IFIP in 1995. Also in 1995 his book « les Réseaux » was awarded the Roberval Prize in France for the best scientific book of the year (170 000 copies sold January 2018).
Guy Pujolle is co-founder of QoSMOS (www.qosmos.fr), Ucopia Communications (www.ucopia.com), EtherTrust (www.ethertrust.com), and Green Communications (www.green-communications.fr).